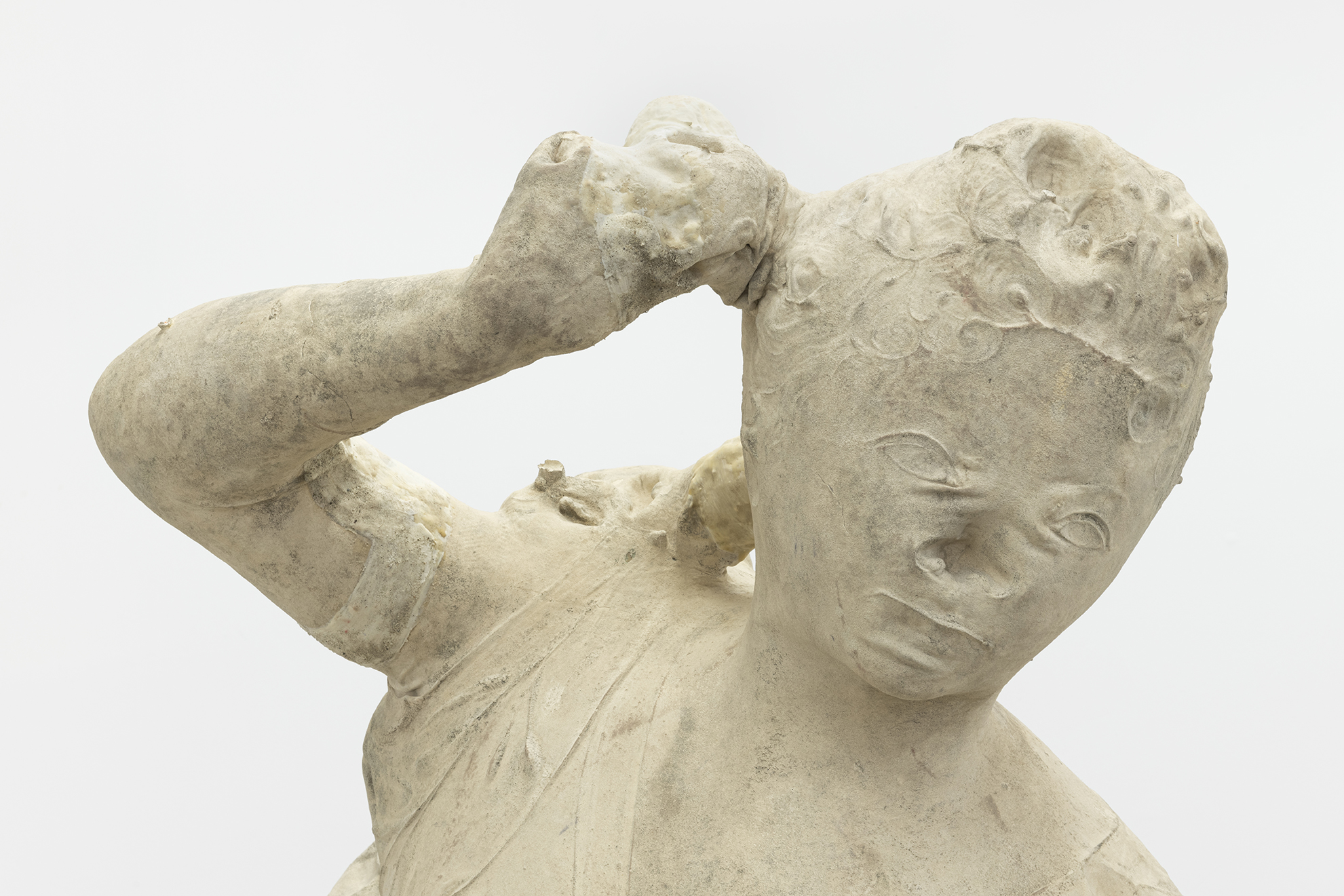 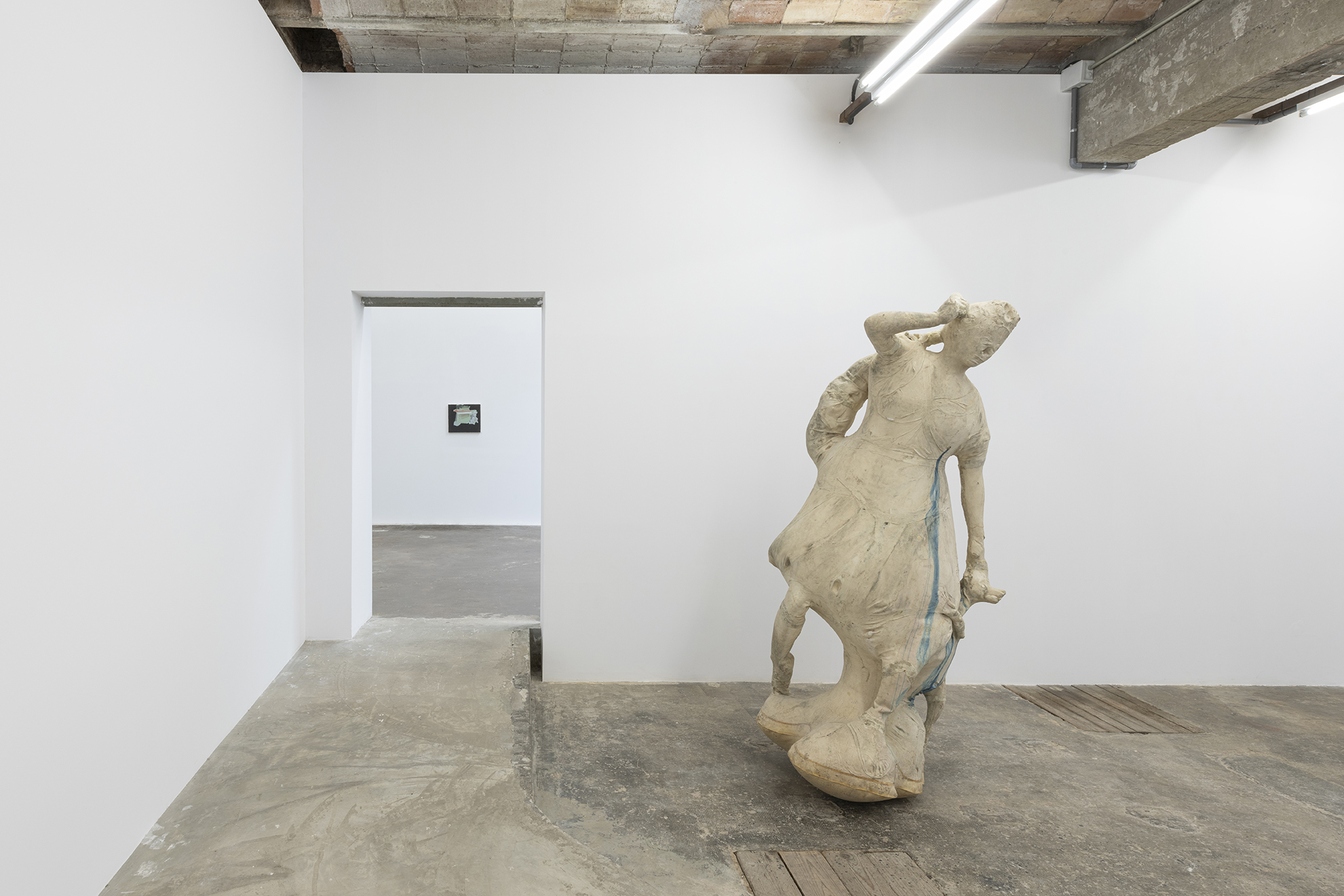 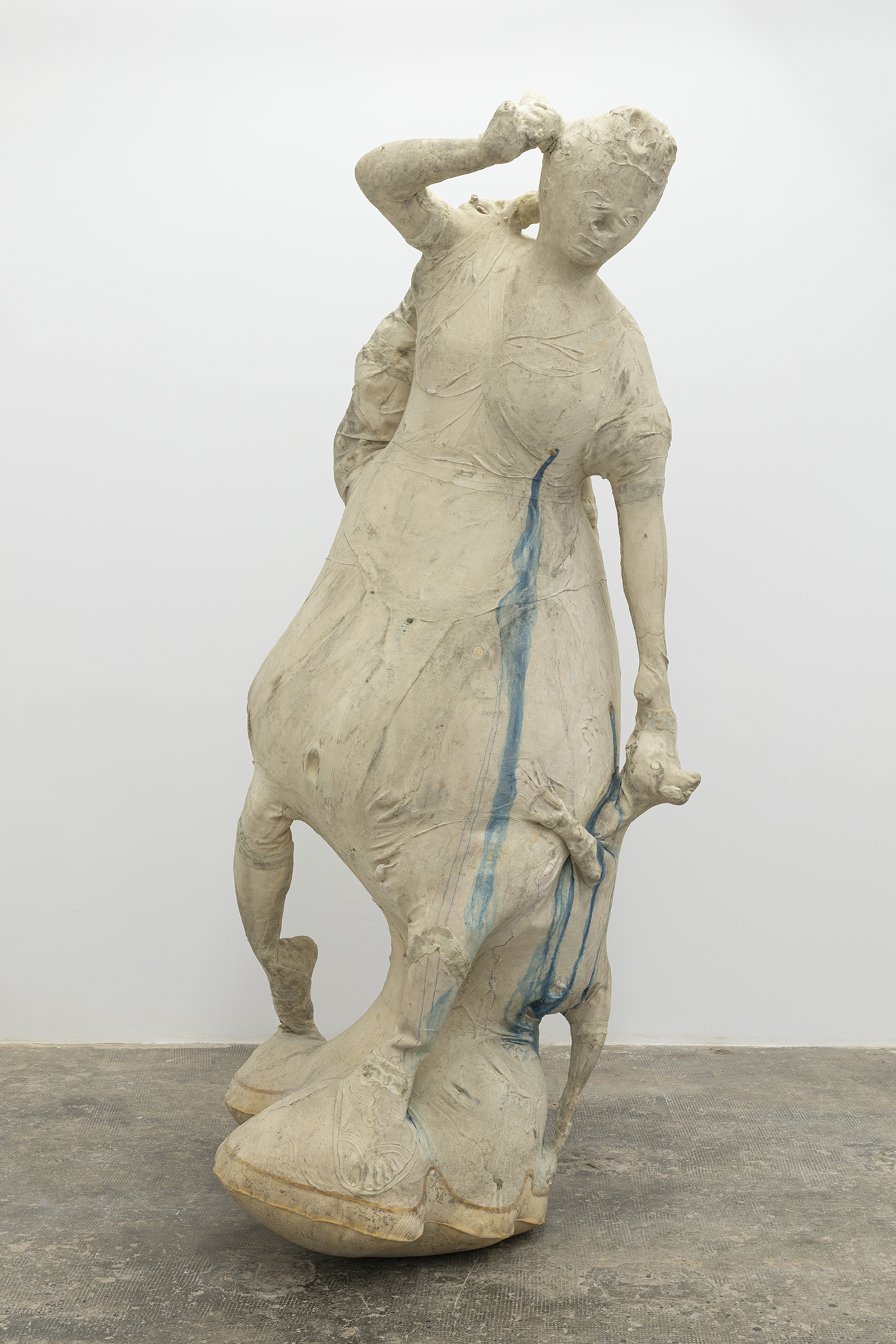 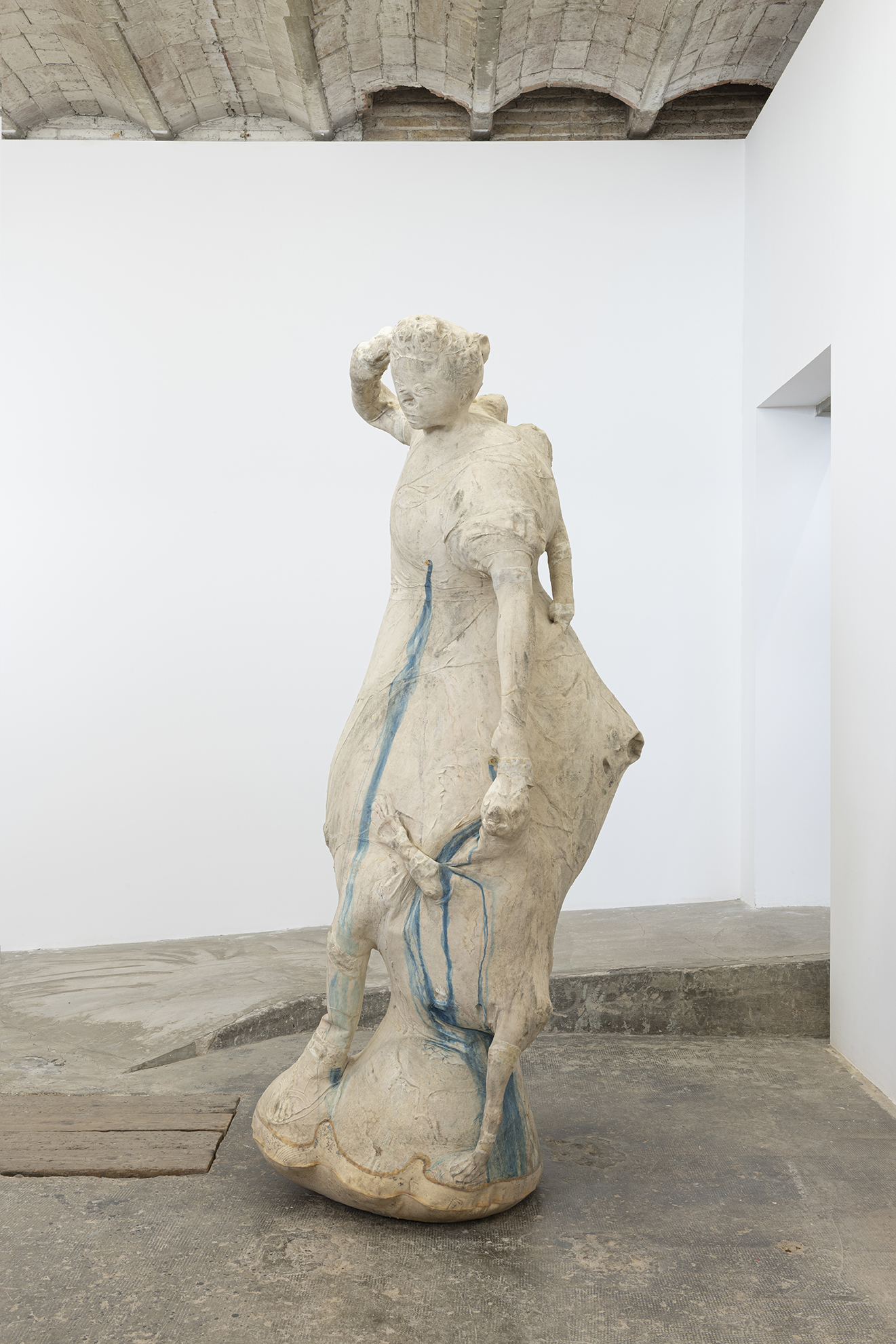 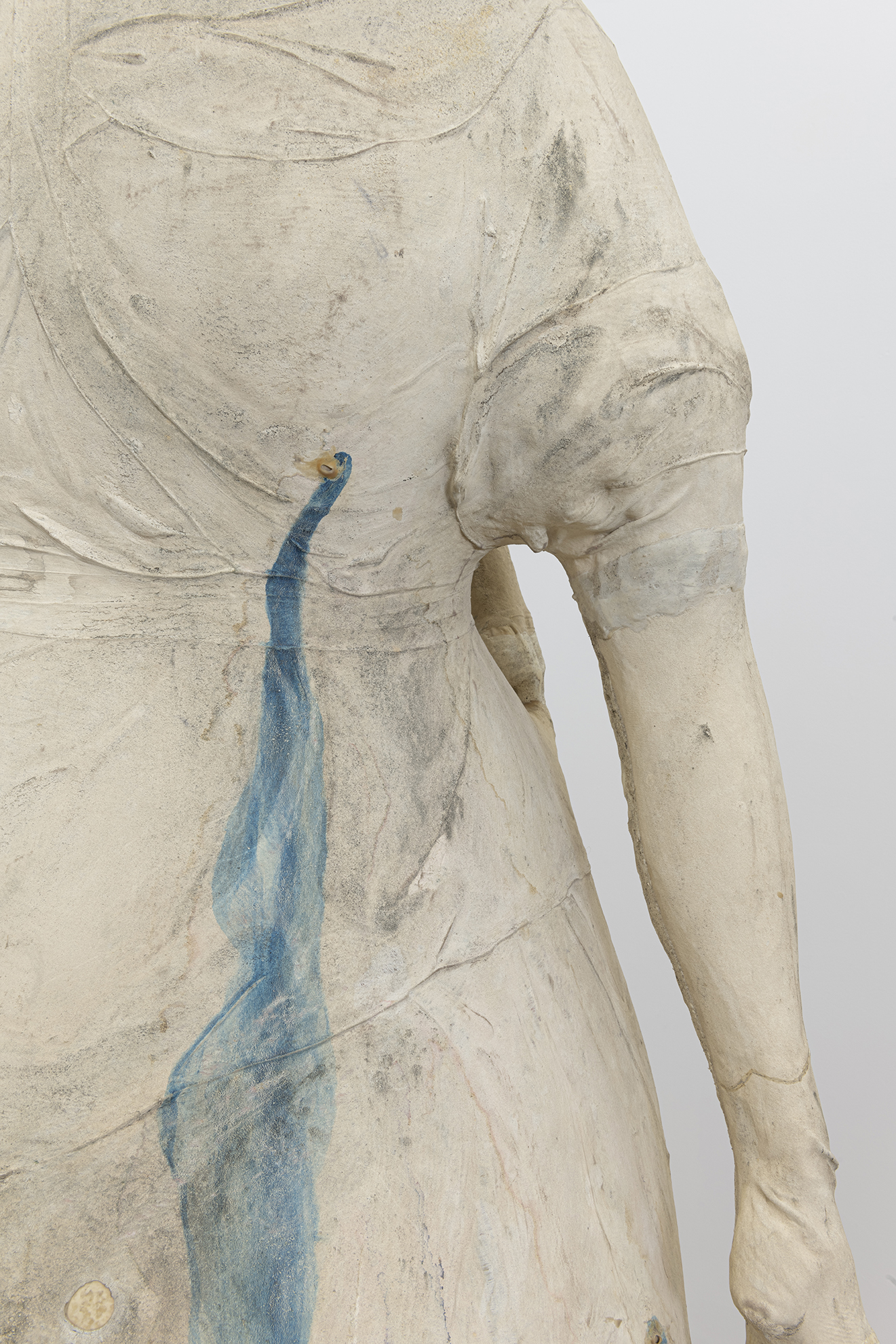 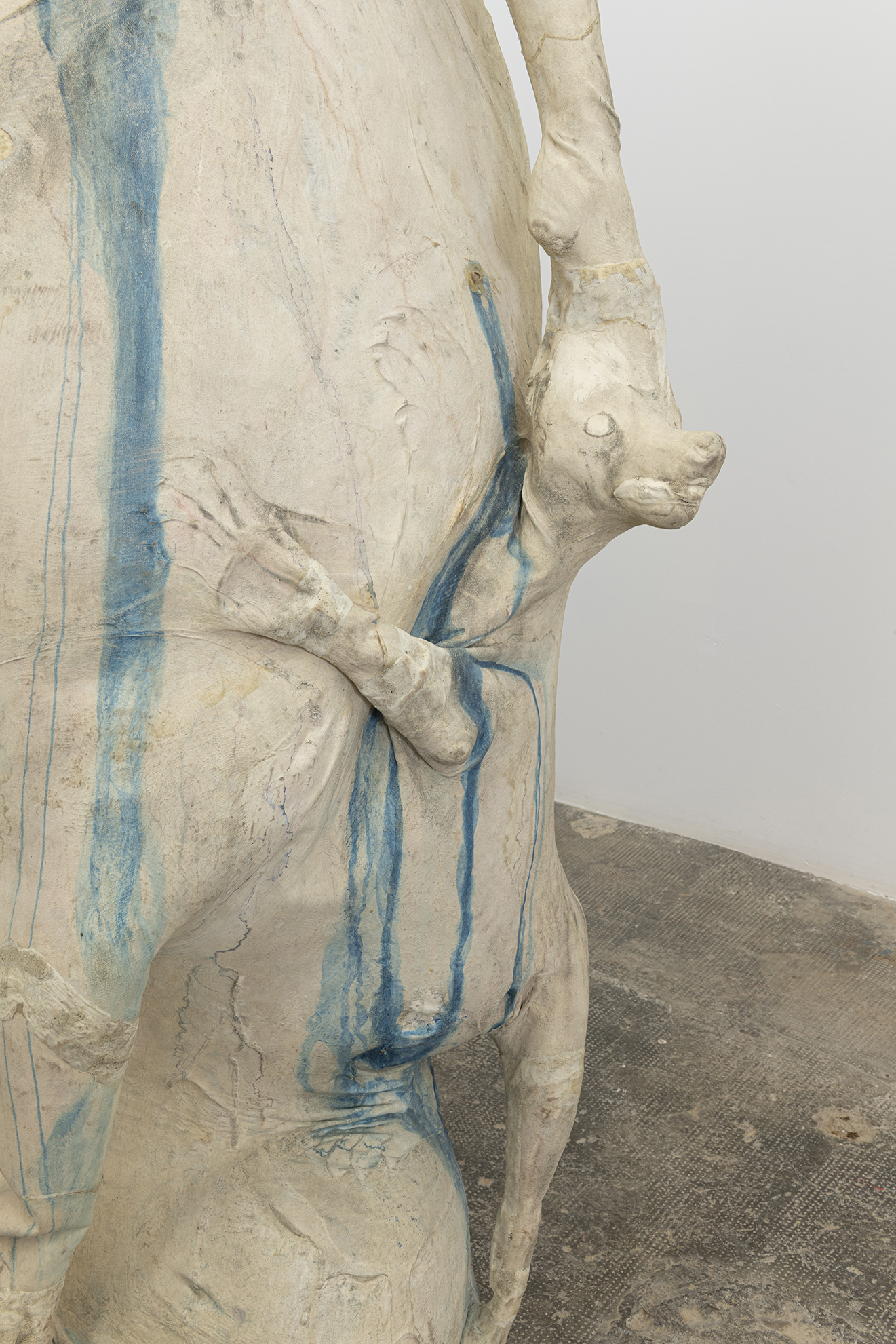 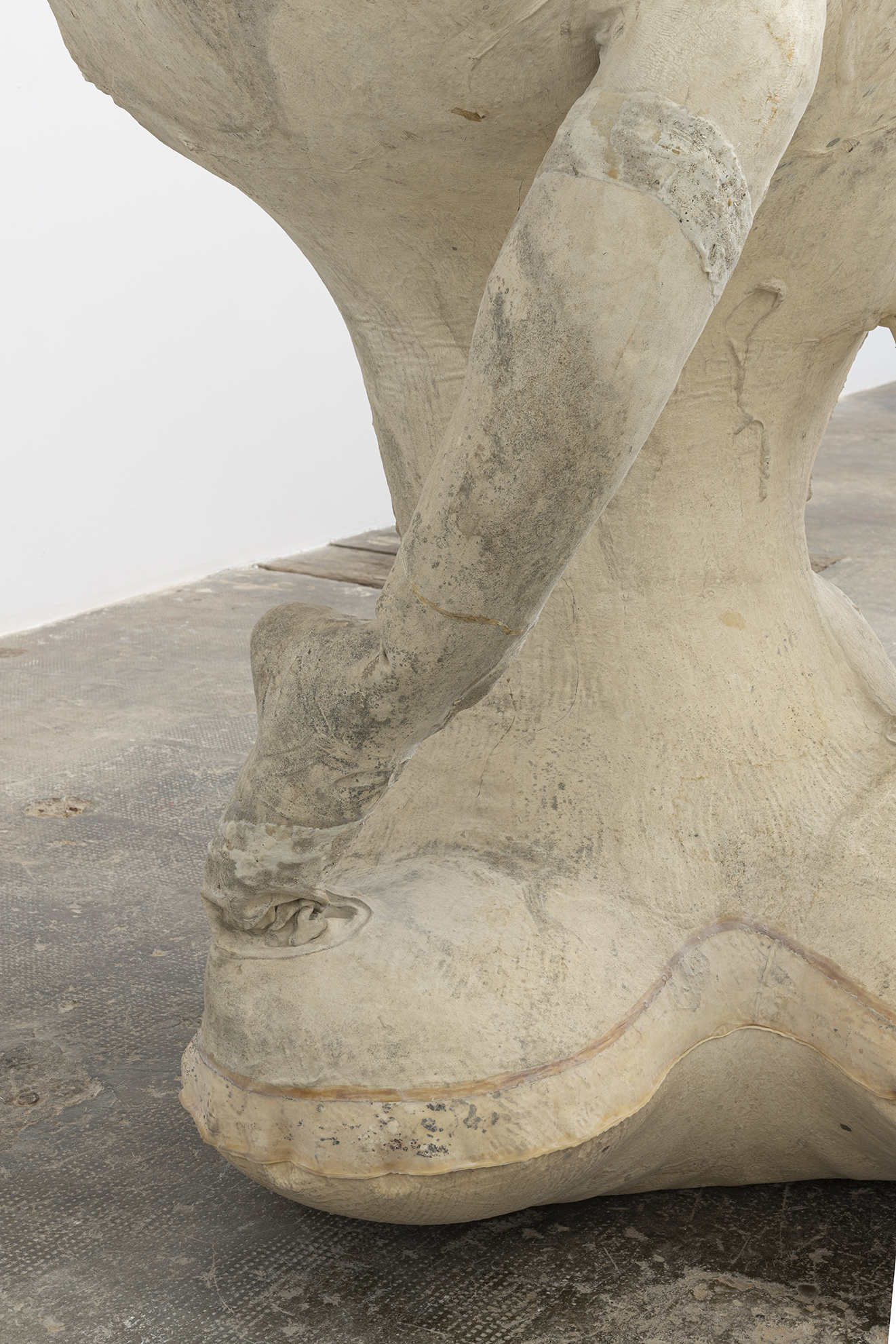 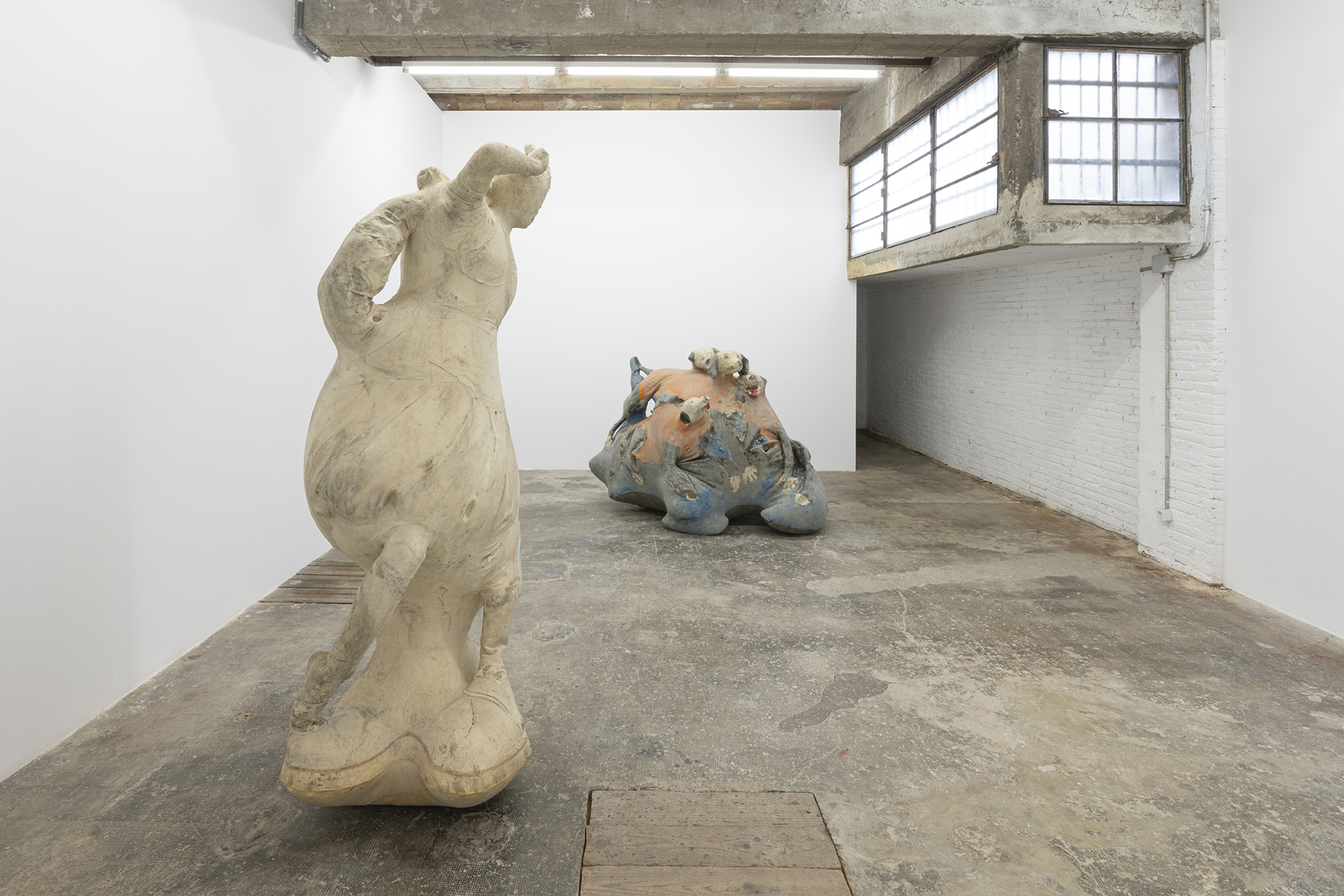 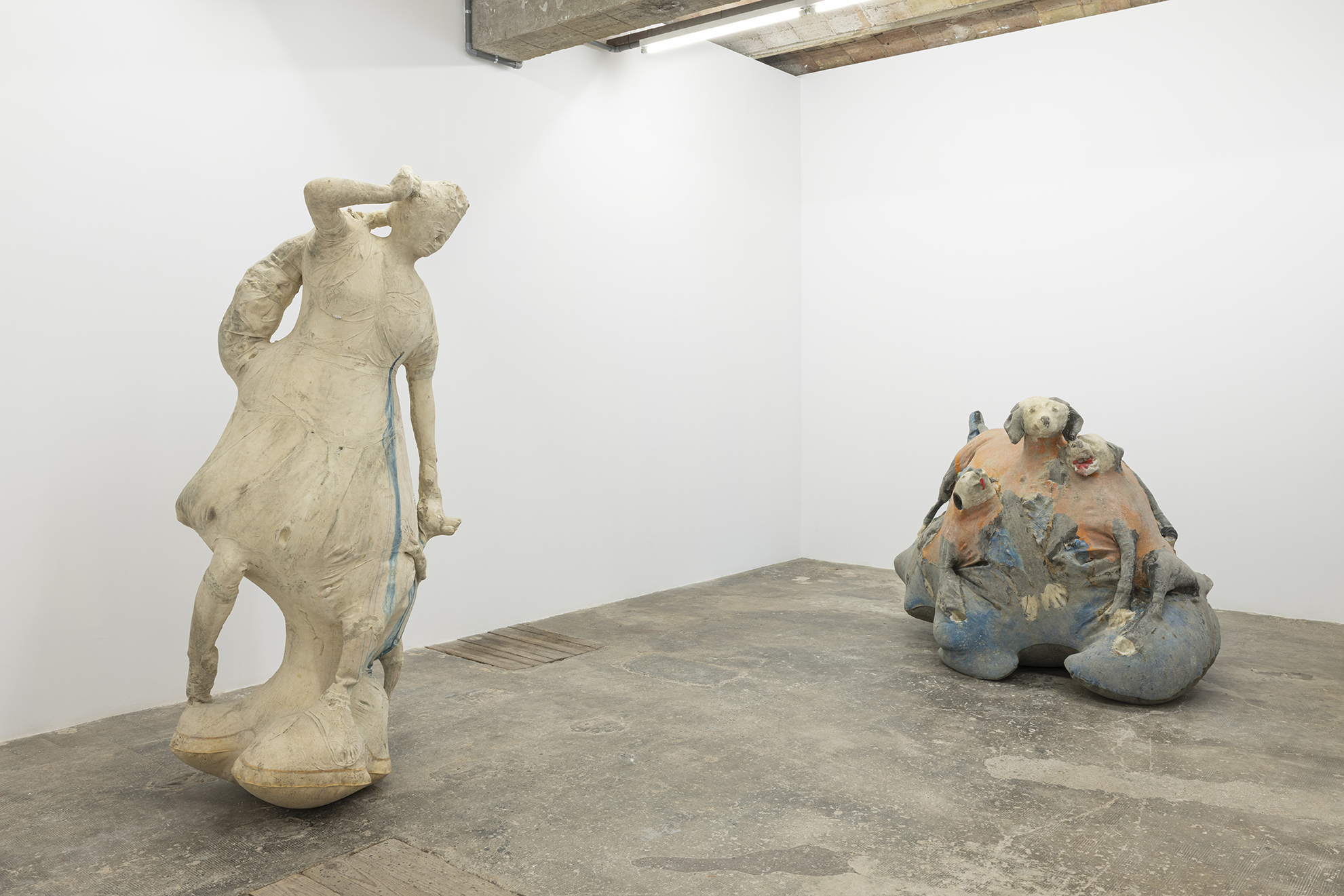 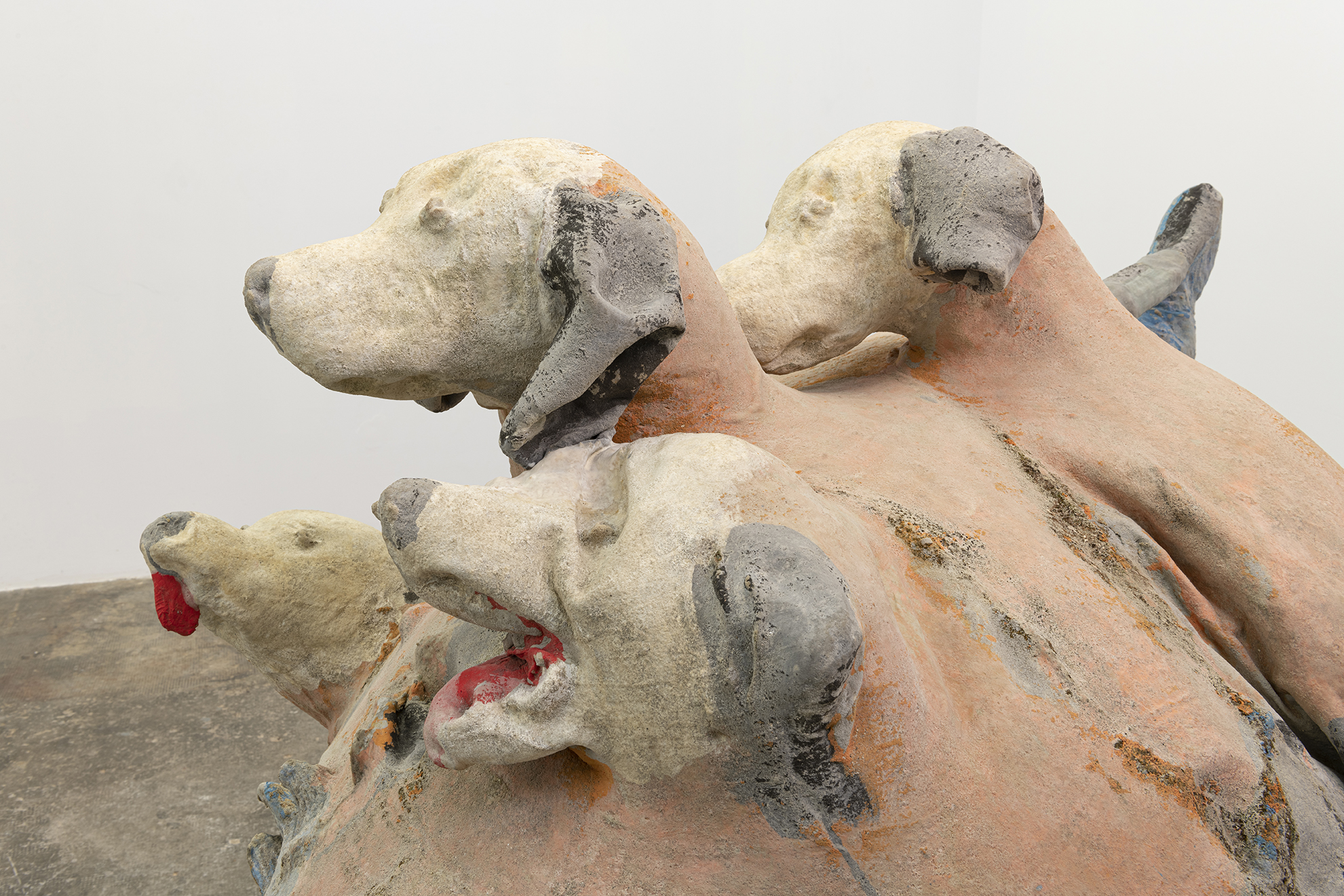 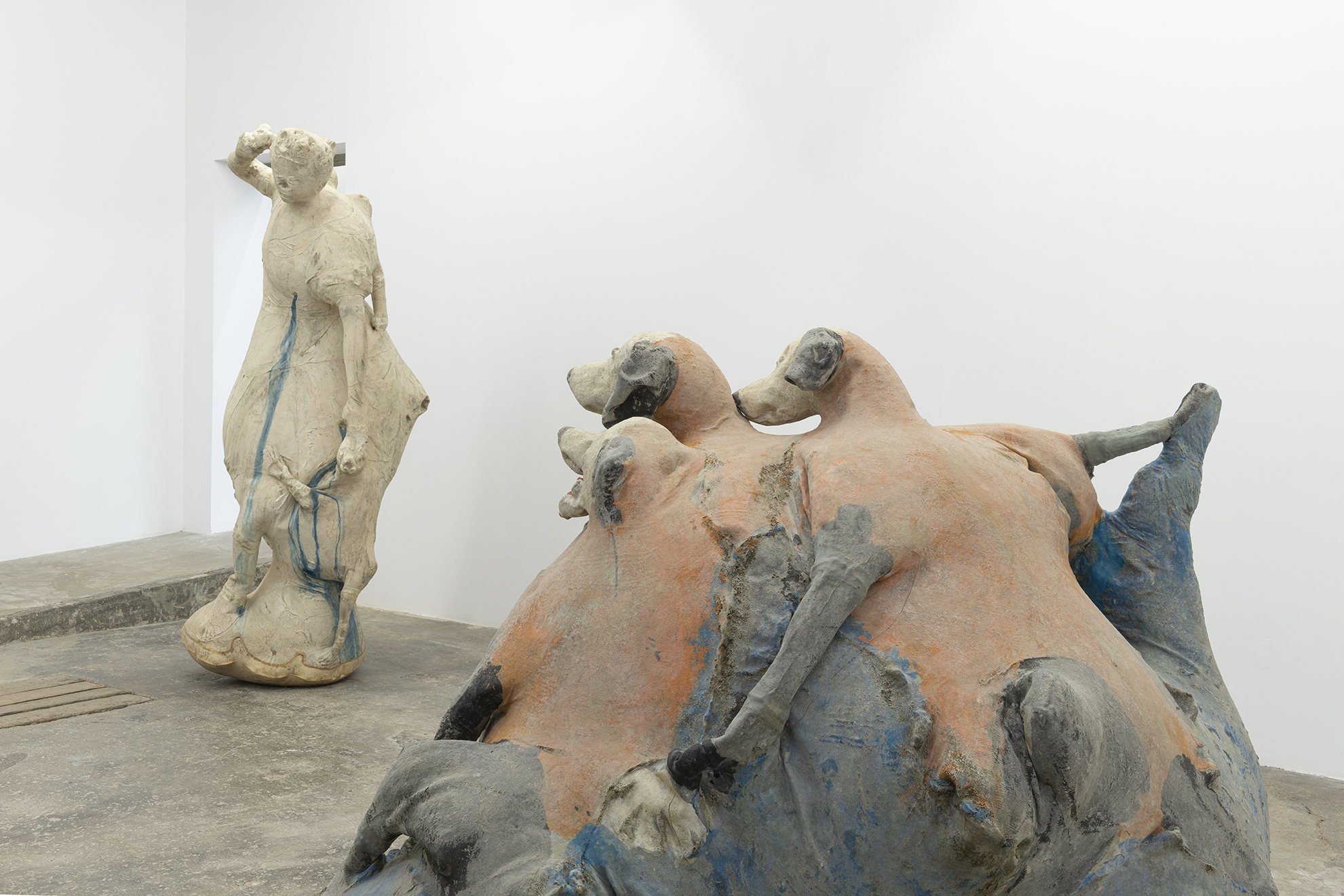 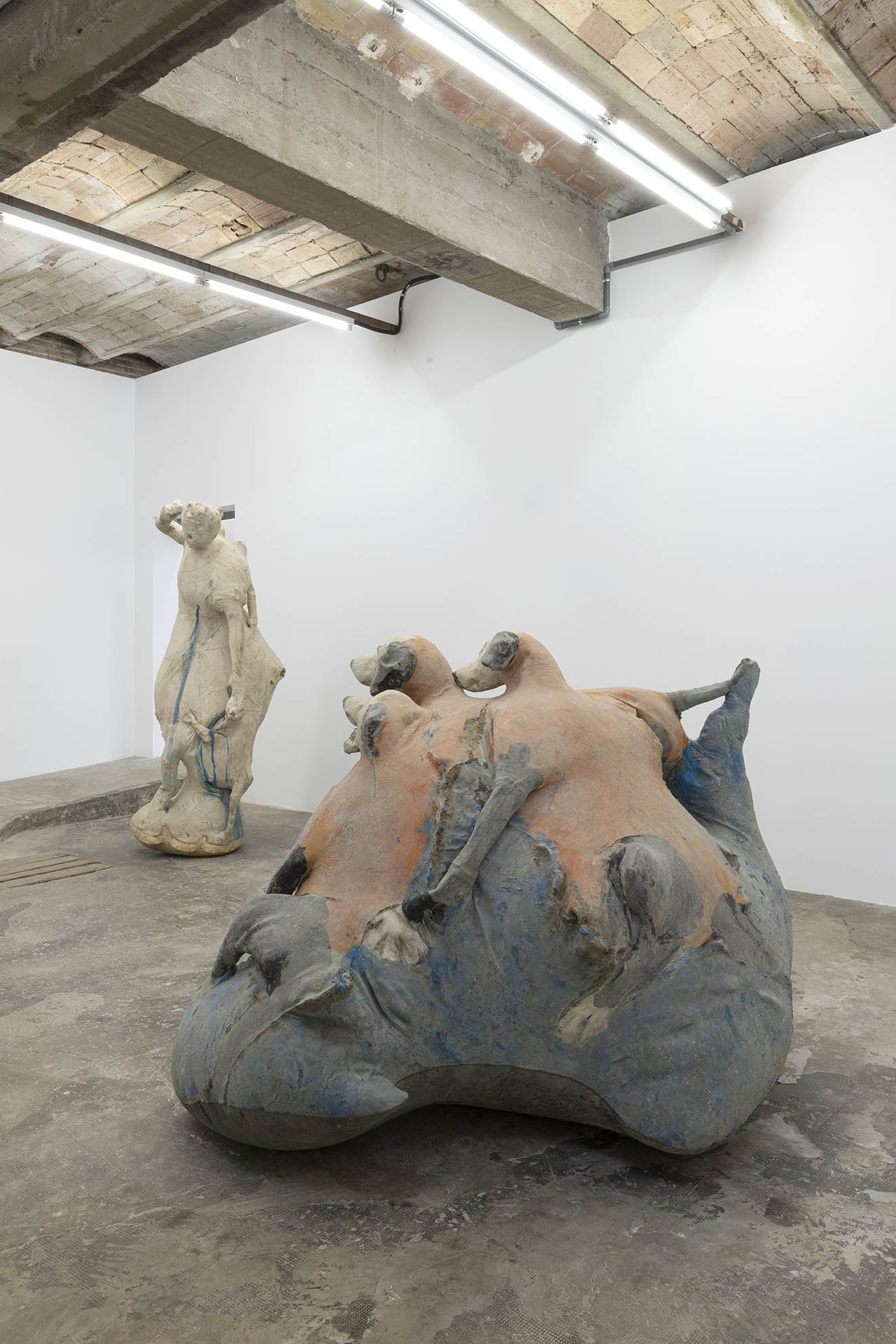 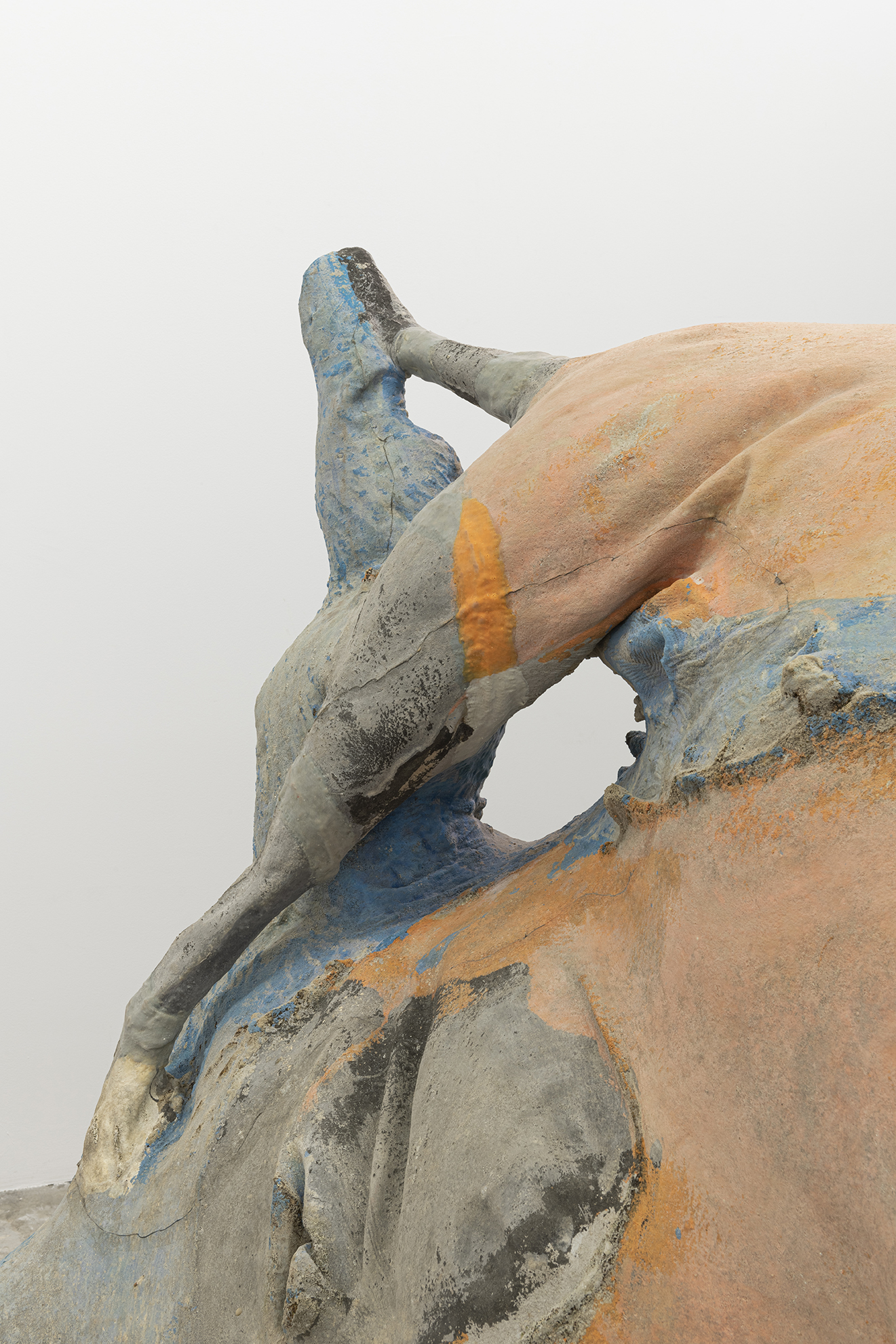 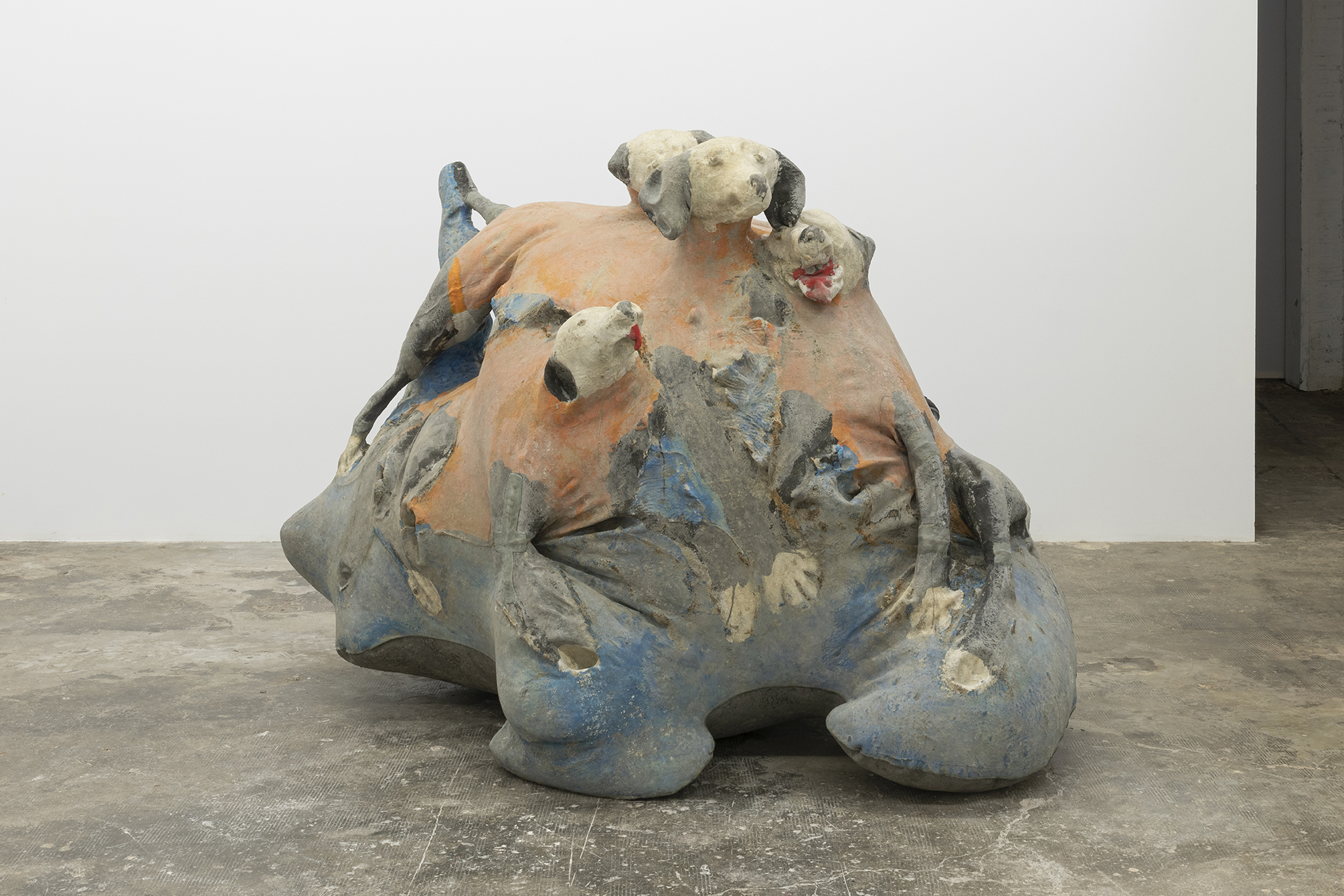 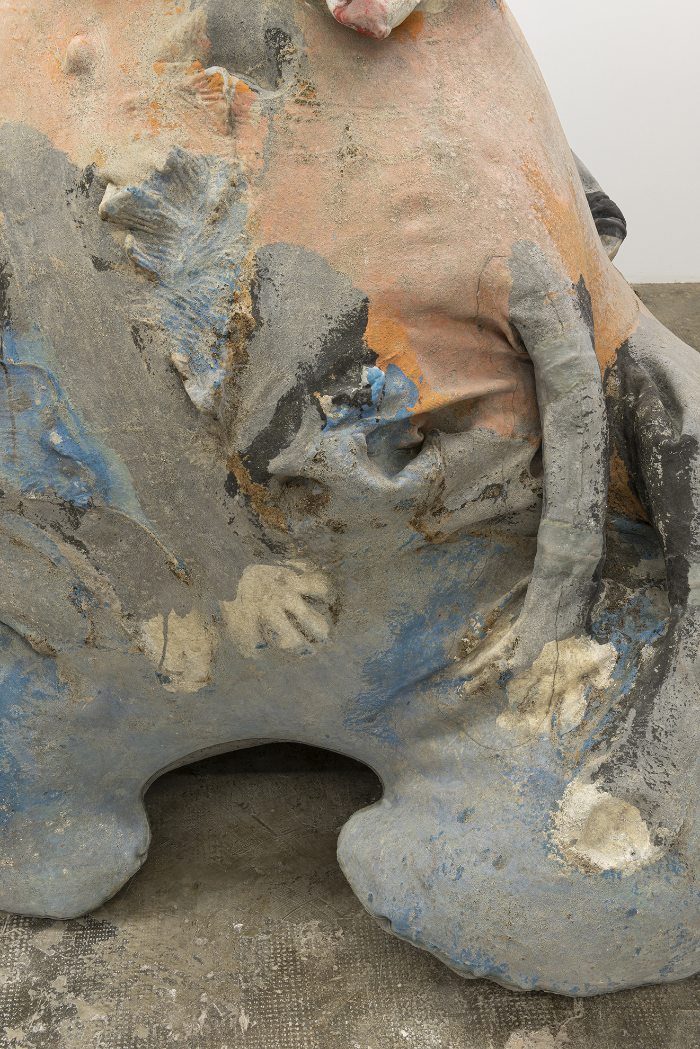 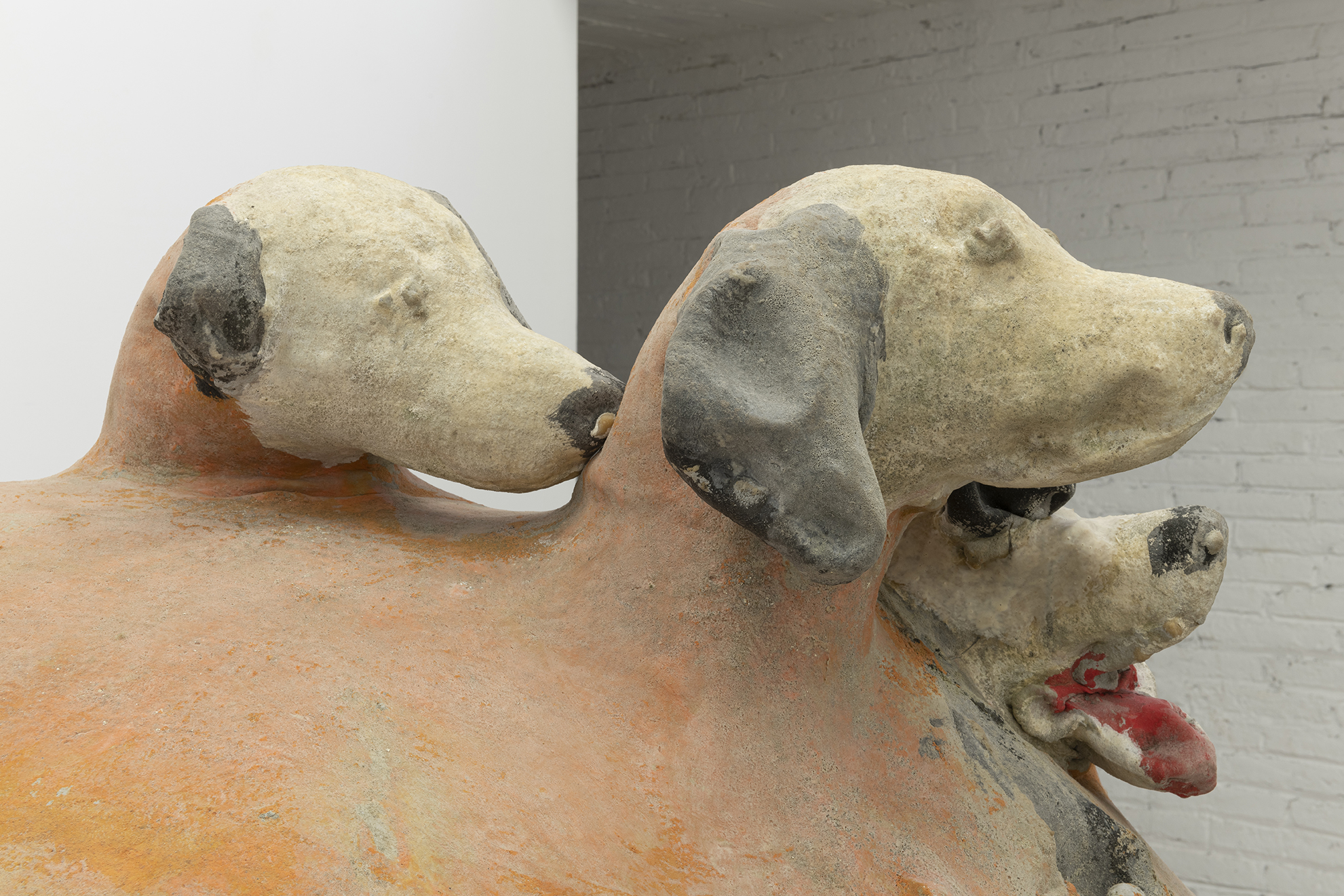 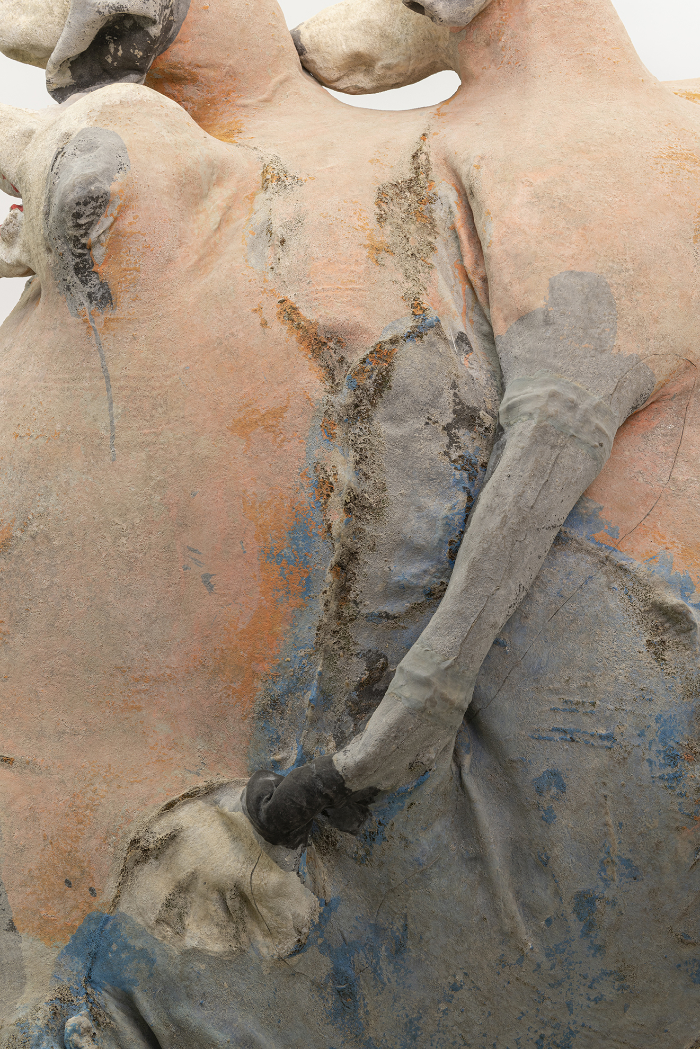 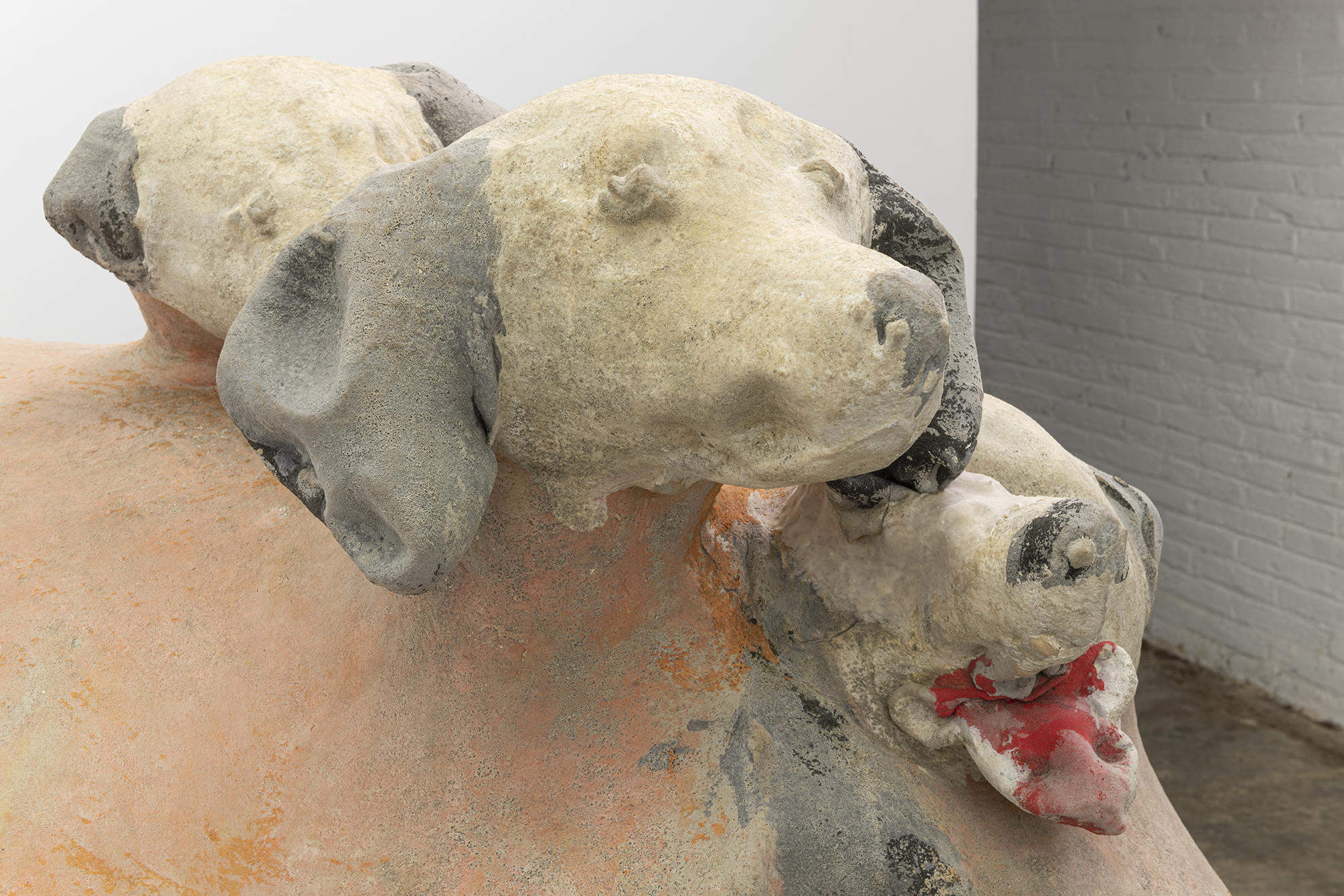 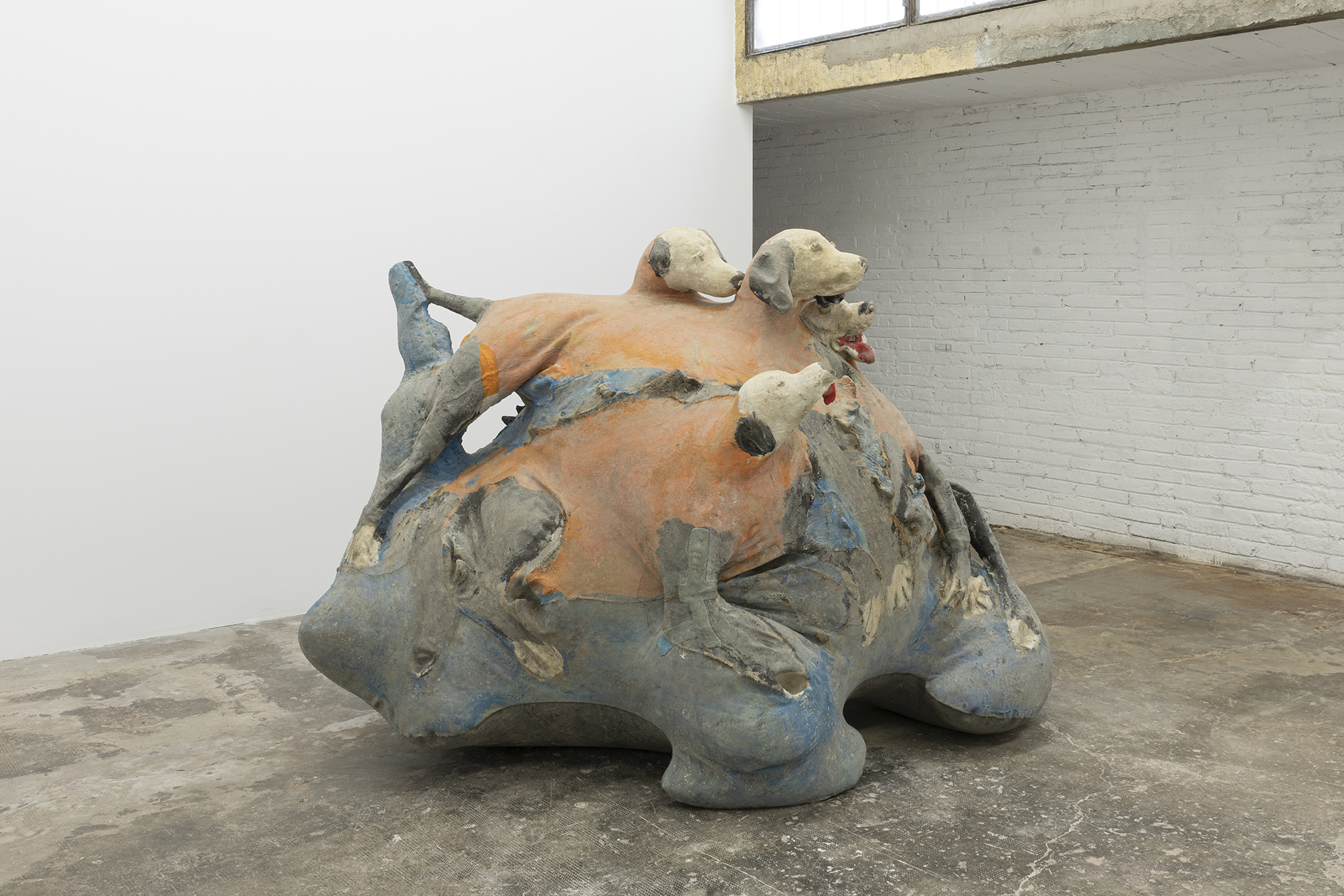 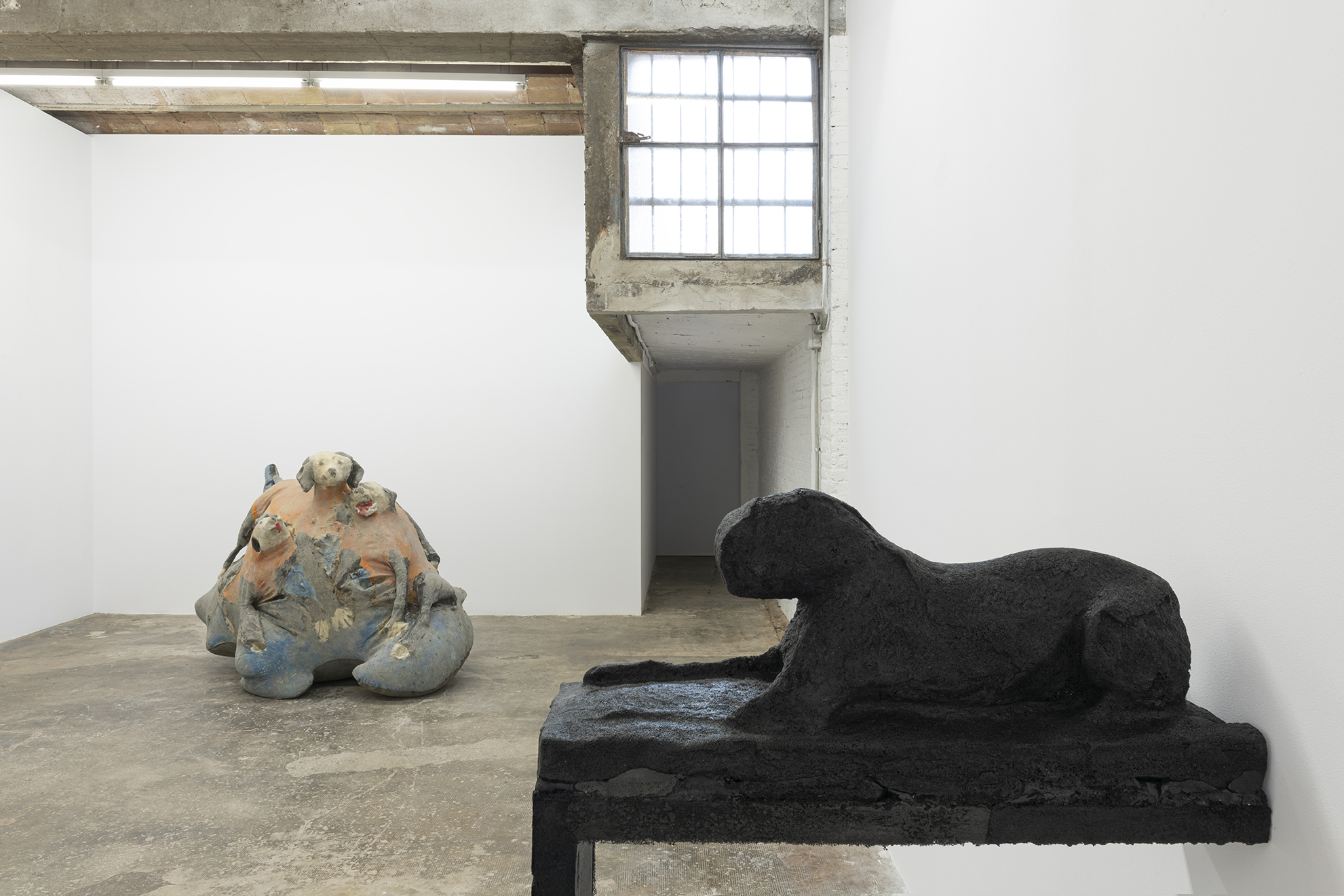 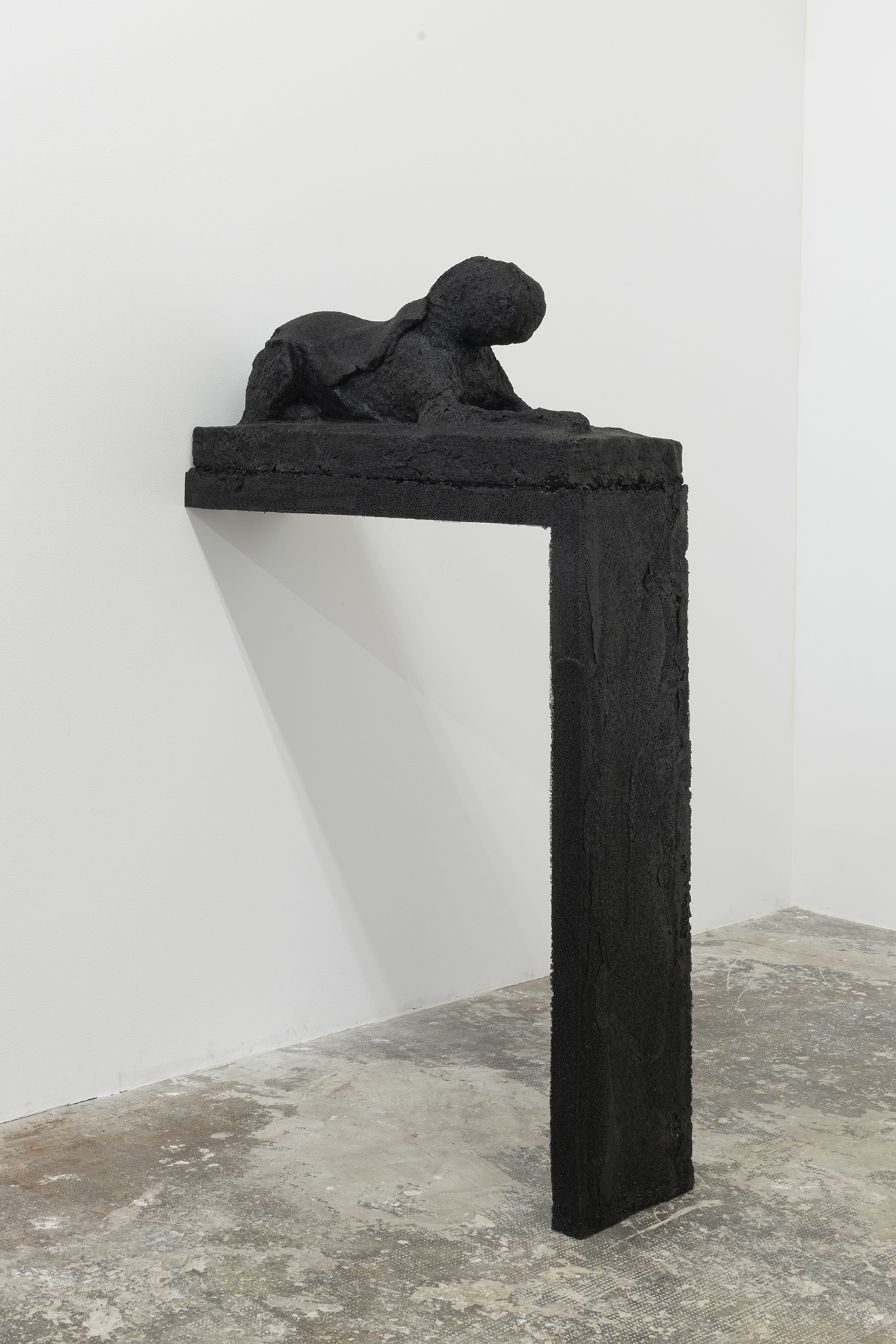 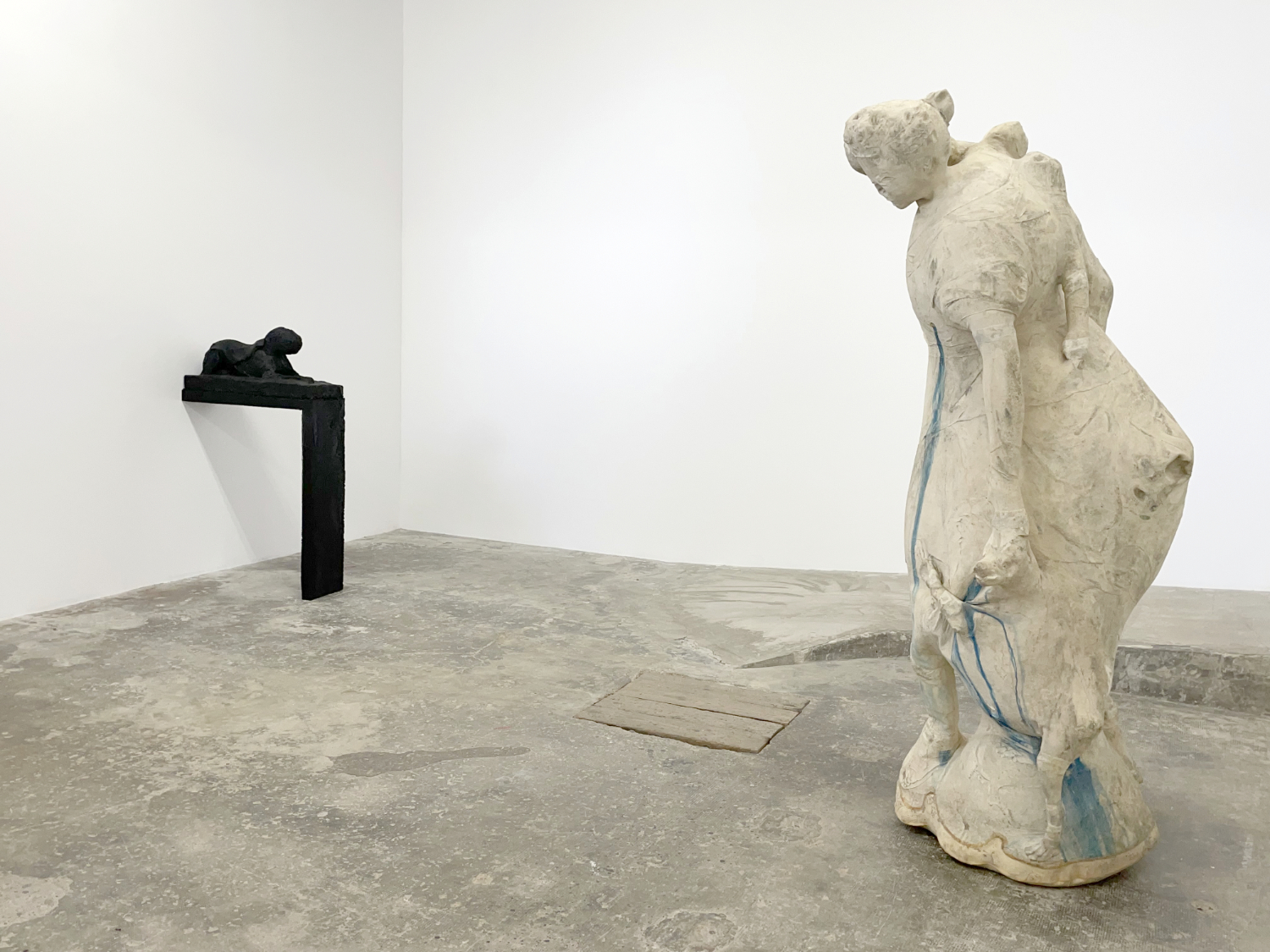 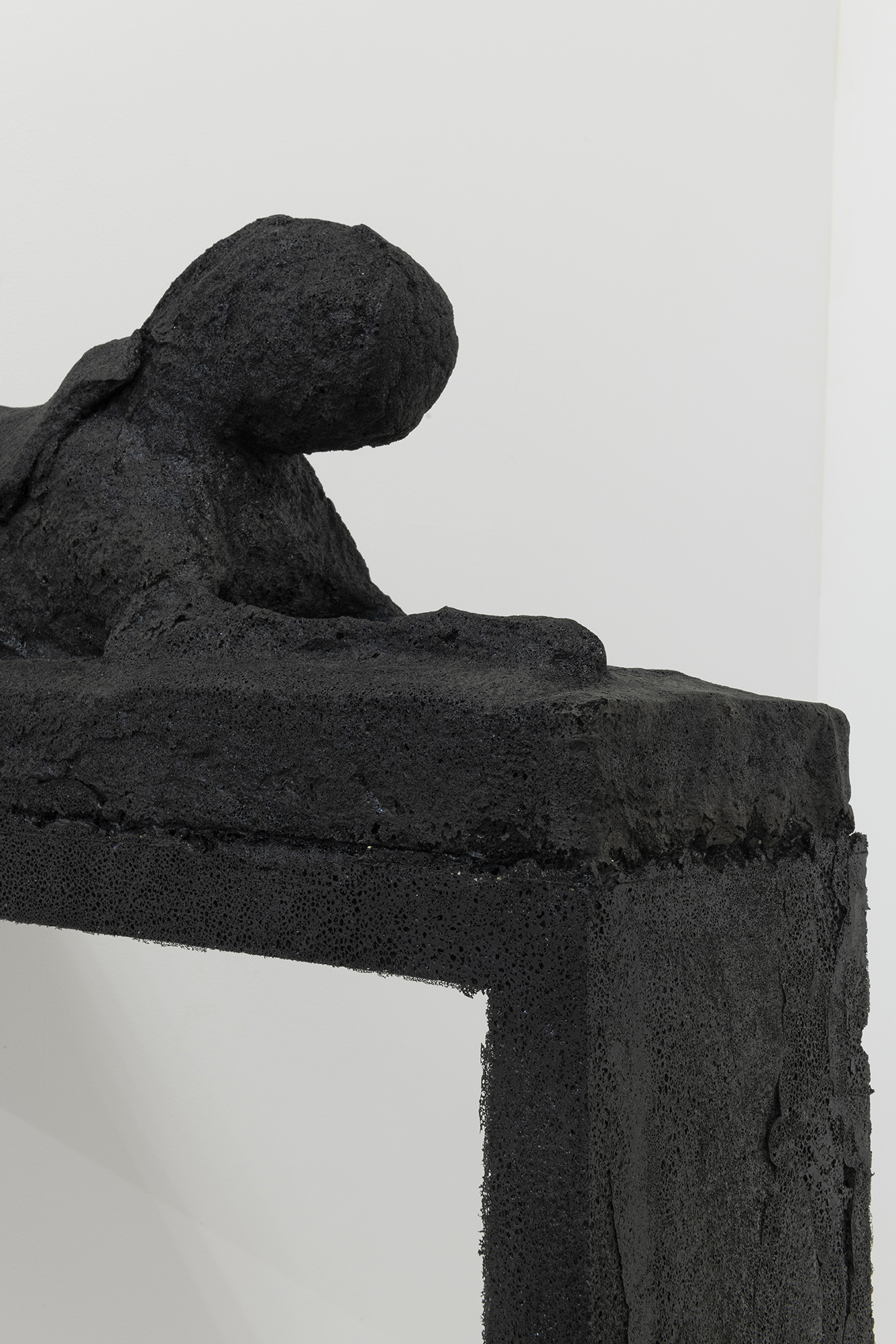 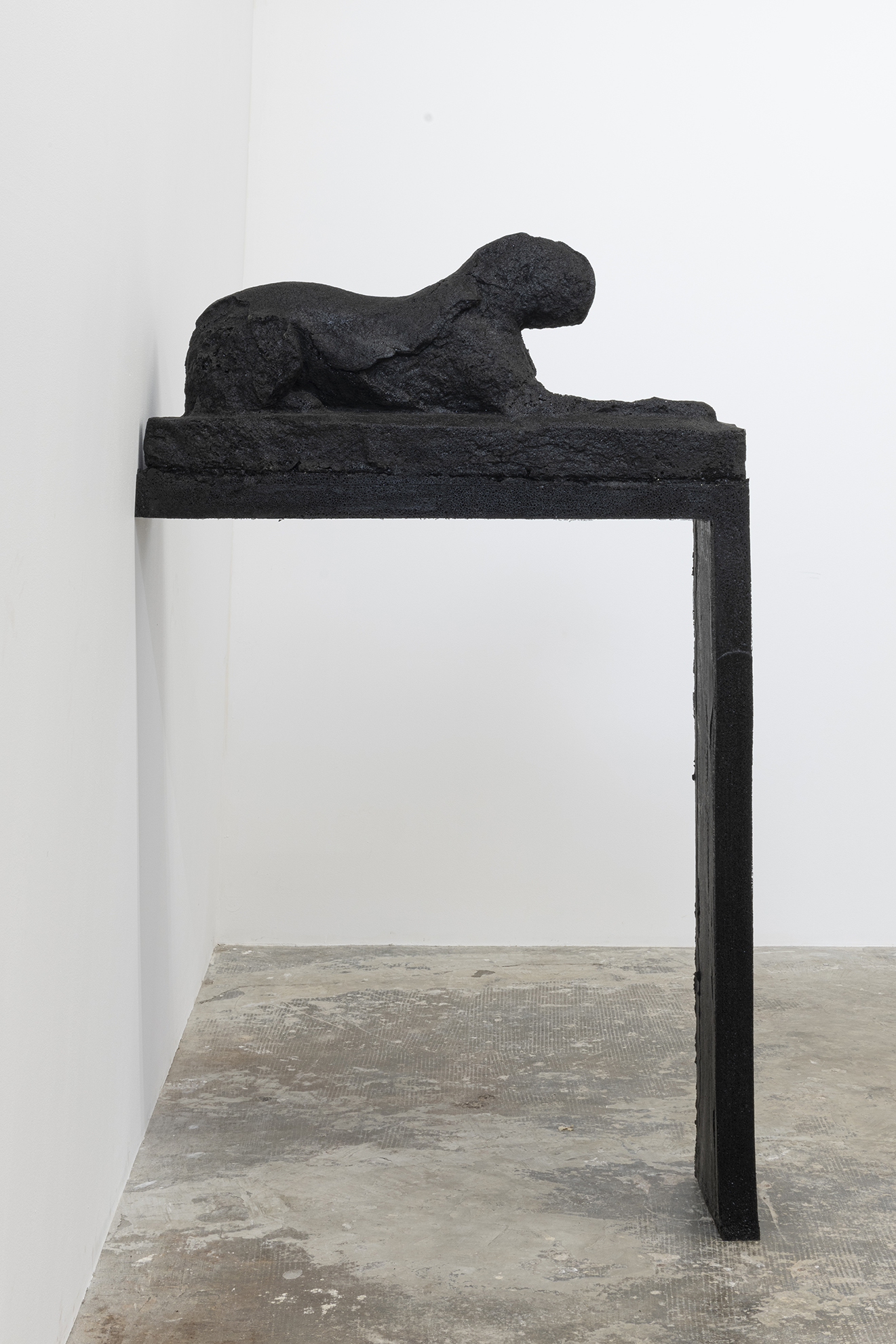 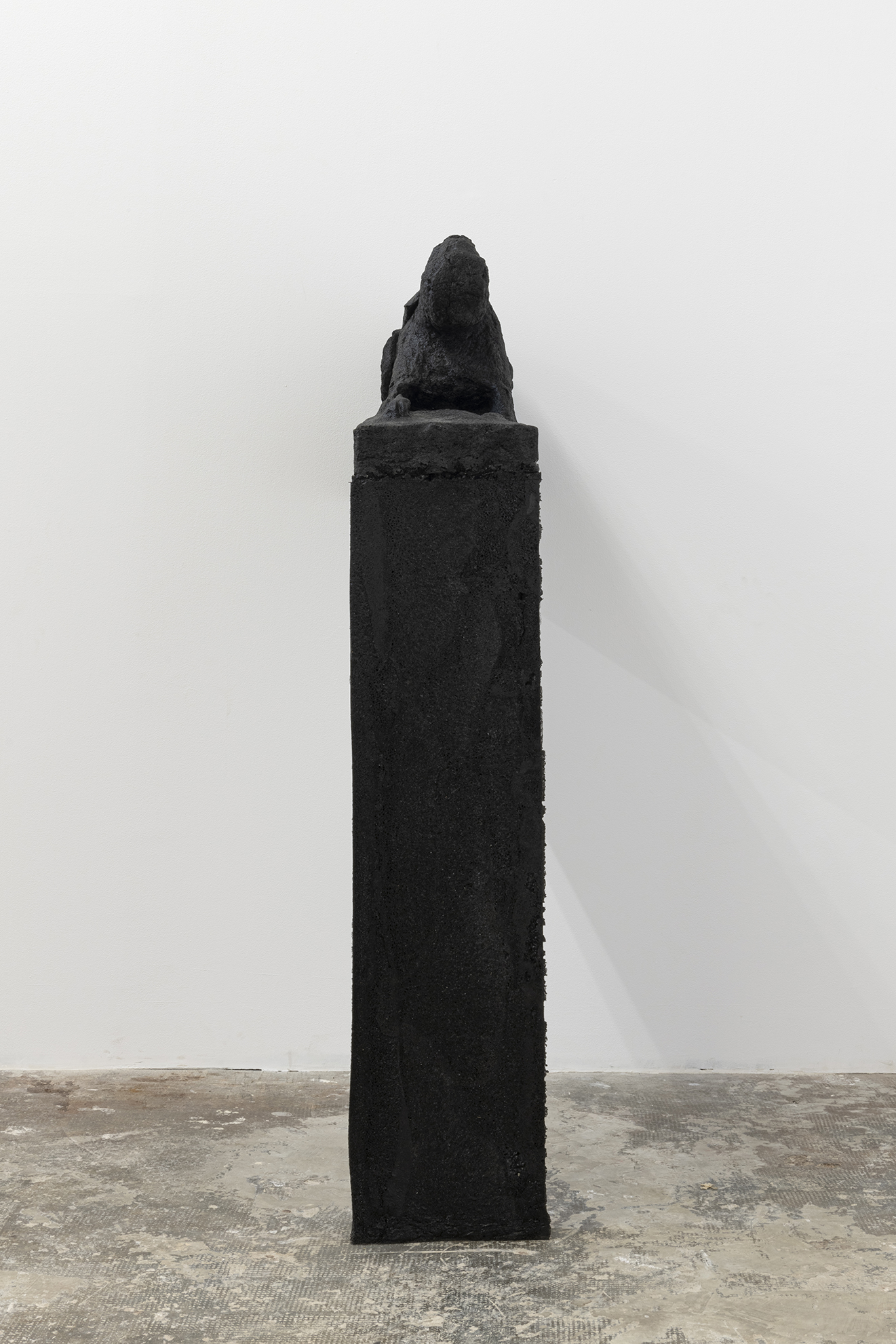 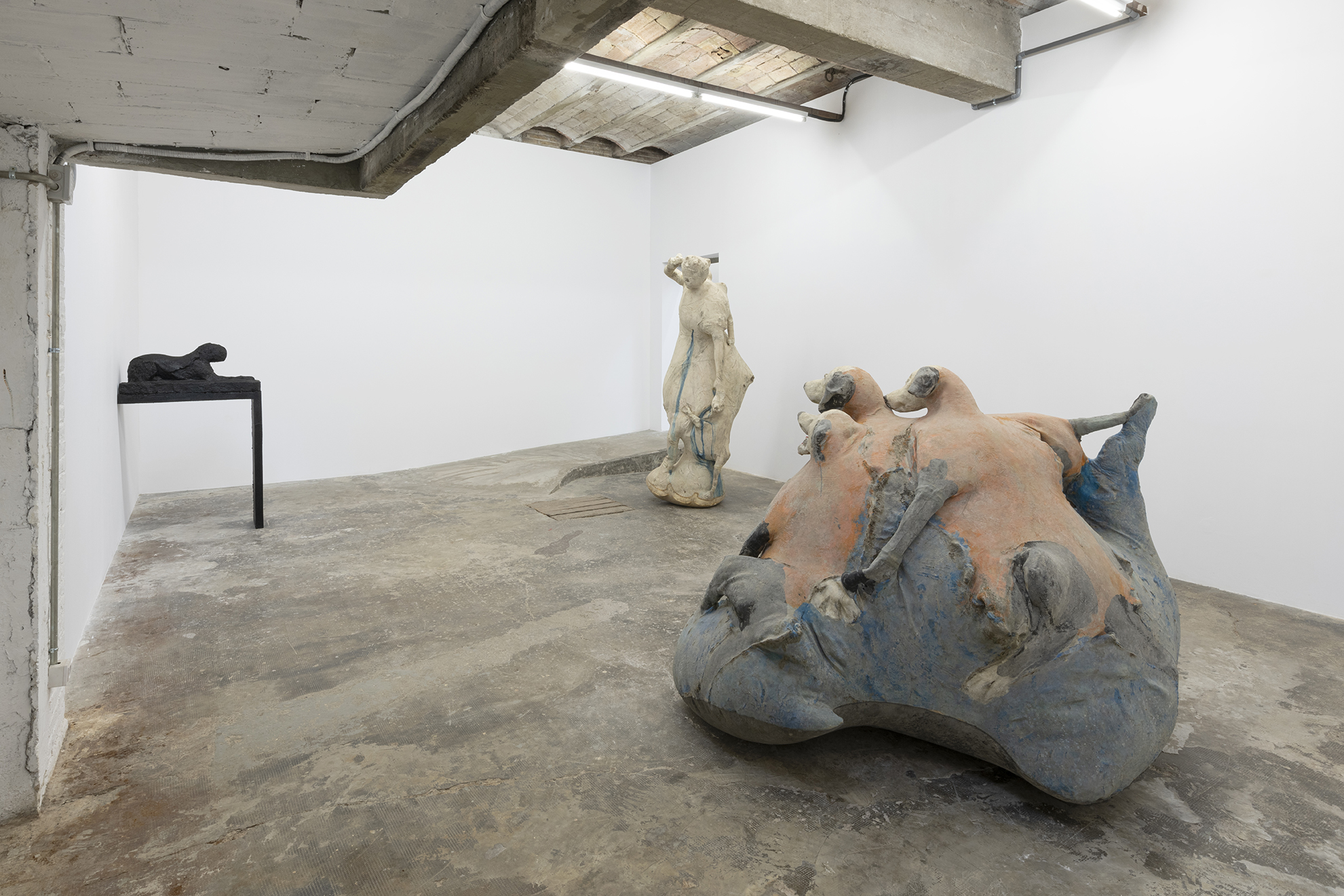 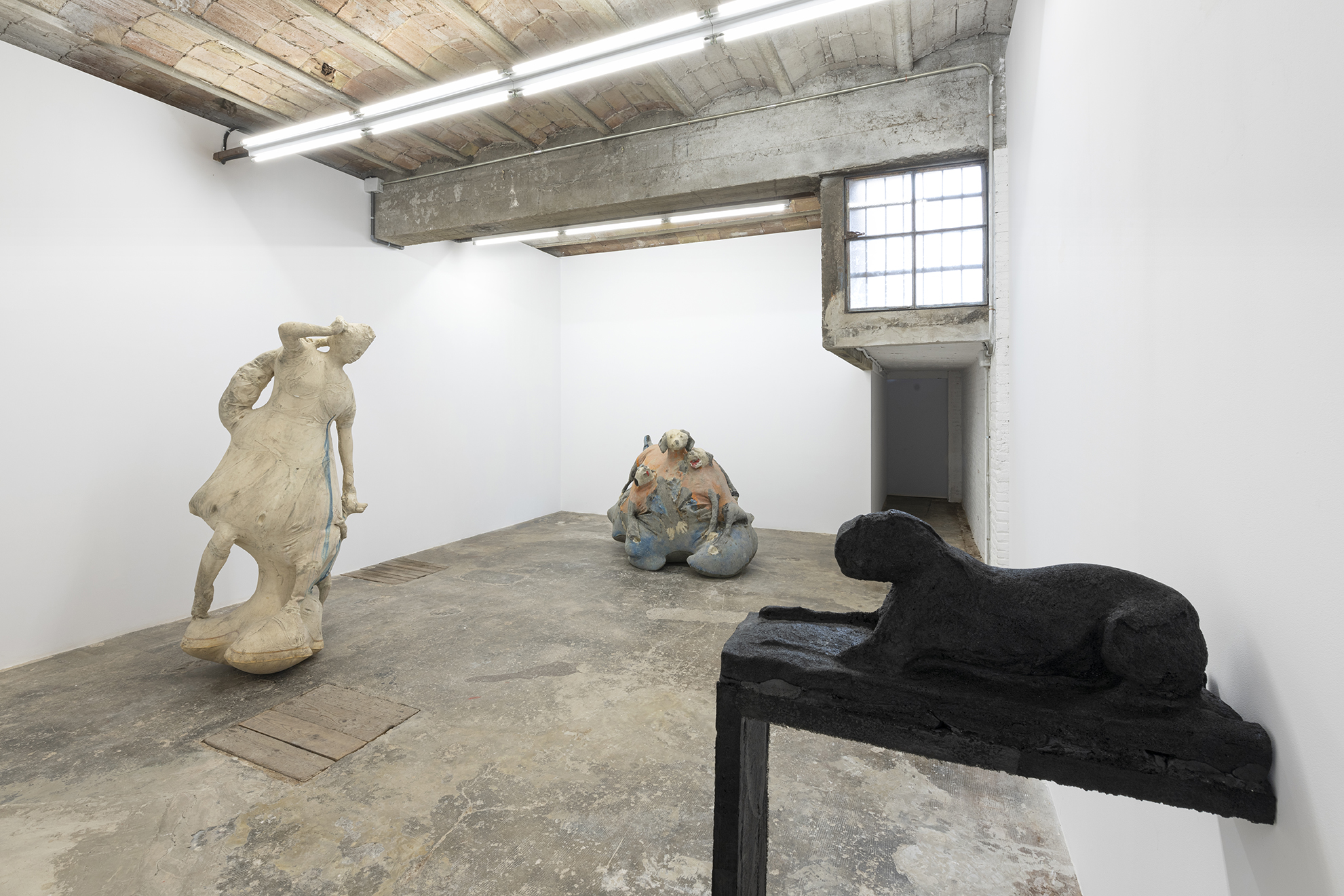 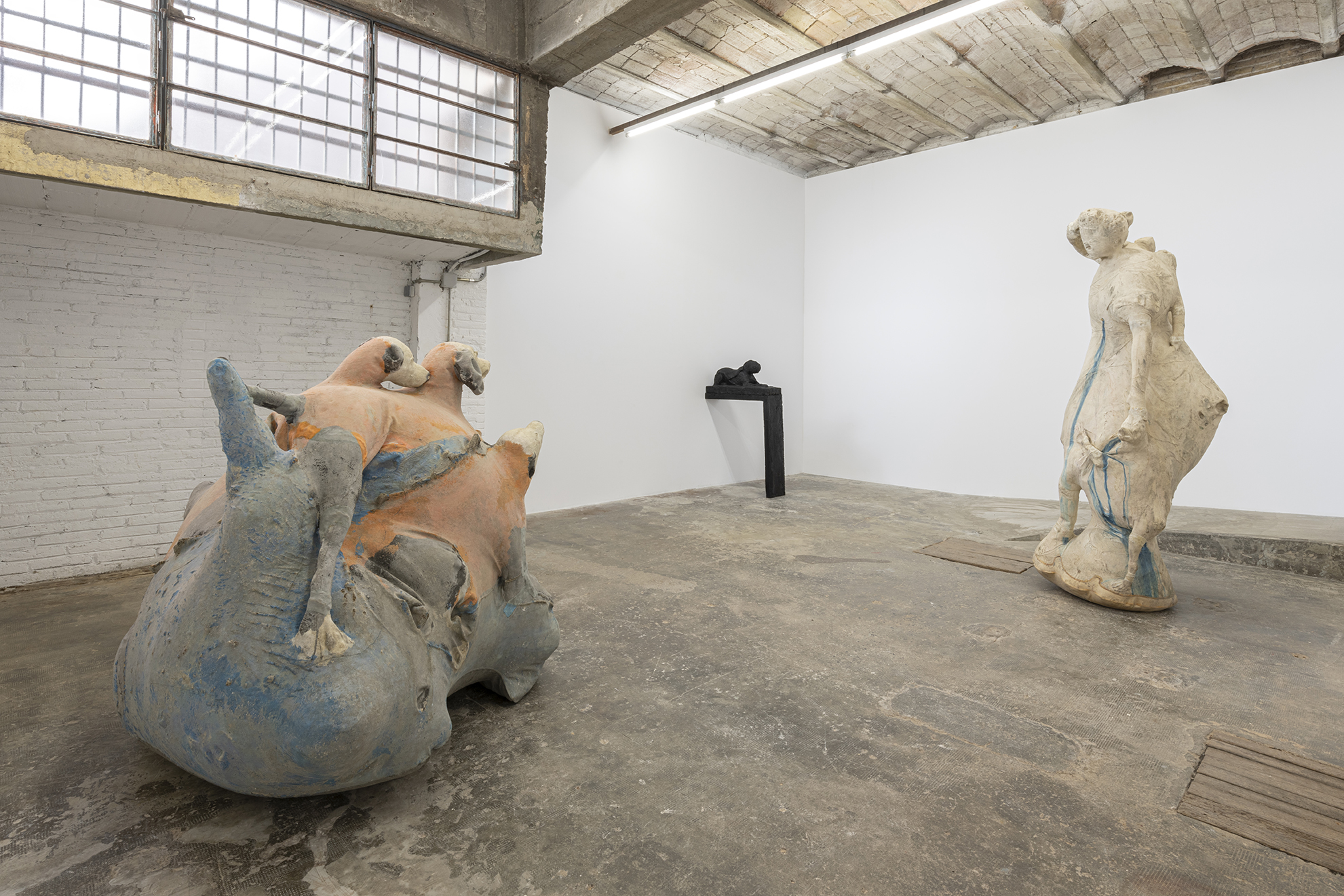 In Pelts (2006) by Dario Argento, a comical and gory scene shows Jack Feldman skinning his own torso in order to make a vest for the stripper Shanna. This dubious offering evokes the clash between Apollo and the satyr Marsyas: the latter was flayed alive as a punishment for playing the aulos too well. But may he rest in peace: I avenged him in my project Antigone (2019), by capturing the skin of Apollo, his executioner, in the gardens of a castle in Yvelines.

J'aurai ta peau (literally "I shall have your skin", meaning "I'll get you" or "I'll kill you"), has become something of a motto for my own sculptural practice.

A holy virgin and some dogs are frozen in the space at Galería Alegría. The observer will recognise, in La tueuse (i.e. the murderess or killer), the face of Artemis, the mythological huntswoman who pursues men and animals just like I hunt down statues in the public space. La tueuse is a latex impression, on a 1:1 scale, of a statue of this goddess. It forms part of my current series on inflatable sculpture.

By analogy, my experiences making sneaky moulds around the city stem from my adventures in clandestine graffiti. I act at both day and night. The objective determines the approach; it's a game of strategy, so I try to blend into the crowd, and I've come up with neat tricks for when I'm on the lookout. I disguise myself to heighten the deceit; I fine-tune my cover story just in case I get caught out. This working time, performative and theatrical, is the first stage in the making of my inflatable works, the aim of which is to produce a skin.

The next step is about the strength and impenetrability of this skin. In my workshop - which soon begins to look like an operating theatre - I inflate, cut, graft and superimpose layers of fibreglass and latex, in a process not unlike mummification. While the embalmers in the New Kingdom would use sand, sawdust and even ceramics to fill the corpses after gutting them, I use just one element: air. For me, air is the invisible sculptor that moulds and shapes my models. It gets right into all the tiny nooks and crannies of the membrane, transforming any hollow areas into protuberances: it dilates and deforms the skin, sometimes to the point of abstraction.

This is true of La chose (i.e. "The Thing"), a nod to the 1982 film by John Carpenter in which a group of dogs infected with an extra-terrestrial virus undergo a violent metamorphosis. La chose was created in the same way as La tueuse, but this time I used colour when first making the mould, so the gesture is more directly linked with a search for the pictorial. This approach reactivates the polychromatic appearance of ancient and medieval statues: it might seem far-fetched to us today, but they were in fact often painted, so they looked nothing like the white marble sculptures on display in our museums now.

A third figure observes the other two, like an intruder from a different composition. Its foam body imitates stone. This is L'embaumeur, the embalmer. It has the attitude of Anubis, the Egyptian canine deity, god of embalming and the afterlife. No wonder, since I created the original mould from part of a tombstone that I came across in a Paris cemetery. Indeed, as J.G. Ballard states in his novel The Atrocity Exhibition (1969): "A visit to Père Lachaise [cemetery] in Paris adds a year to one's life." So, digressions or a panacea?